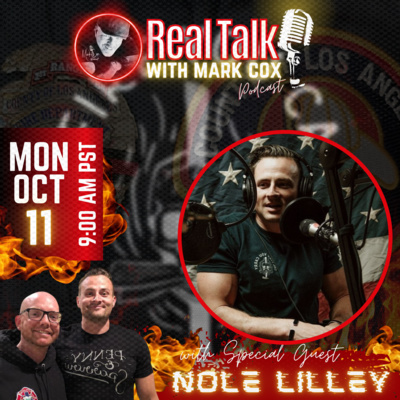 Nole Lilley will be joining me tomorrow, we will be in house unless he gets called out in the FD. Looking forward to this one, he host the podcast, The Fire You Carry He is my Nephew Cody Mooney brother in law.

Nole currently lives in the mountains of Southern California, with his wife Heather and their 3 children. Nole and Heather have been married for 18 years. He has worked as a fireman with L.A. County Fire for the past 12 years. Prior to that, he served as a United States Army Ranger, deploying multiple times into Iraq and Afghanistan. Nole and Heather have experienced the death of two of their sons and their journey through that loss has shaped much of the people they have become today. Nole has also dealt with post-traumatic stress related to the loss of his sons and his time serving as a Ranger. As a fireman, Nole has continued to live and work in a world where exposure to trauma can be a very regular occurrence. From this experience, Nole felt called to start a podcast where he could share his experiences with others who are working through difficult times in life and also share the struggles and triumphs of other men that he admires.